skip to main | skip to sidebar

This will show you a break down (approximate break down) of the costs of disposables and Cloth diapers. For Sposie Math one, I will make the following assumptions:
-You are a great shopper and buy well priced disposables that are $.25 a piece. Some disposable are as much as $.38 a piece, so keep in mind if you use name brands or have high taxes in your area, you pay more for each disposable.
-You decide to use mainly pockets to diaper. There are cheaper and other options. I will profile one of the more expensive way to cloth diaper now, and the cheapest way later.
-You change diapers 7 times a day. My daughter is three months old right now, and thats probably about right for us.
-You have a moderate to light wetter. A heavier wetter may need other inserts or another system, etc...
-You choose to go with a sized diaper.

Lets say you bought a "stash" of brand new pocket diapers. They will run you roughly $17 a piece, and will include one standard insert. If you wash every other day, 15 will be enough.

May seem like a lot. Except when you are done with your size small stash- you can re-sell them. Lets say you get $12 a diaper when you re-sell (which is reasonable after one child, in EUC).

So, for the cost of two months of disposables, you've diapered your child for 6 months (what I would say is average for a child to outgrow smalls. However- I've known 2 month old children who have zoomed through smalls- and 1 year old children still in smalls).

Now- because we've gone a sized route, and you've sold all your diapers- you have to do it again

Except you can re-use the pail liner and hemp. You will however, want to add some sort of sprayer to your home when your child starts on solid foods, so you can rinse your diaper (no touching toilet water). They cost about $40.

To break even in your medium stash, you'll need to change 460 diapers. 66 days, a little over two months.

Again "average" will be that your child is in mediums for a year. So you've just saved 10 months worth of disposables.

And now its time for larges. This time- you don't need anything special. Just the dipes.

Lets add that together. You've spent $298 to cloth diaper your average sized child (will be more if you have a large child who needs Ex-large- less if you have a small child who stays in mediums) until potty training.

I've just googled it- the first study to come up says 37mths is the "average" time to potty train. Thats a little over age 3, so lets just make it 36 months for the sake of my sanity.

Now wait a minute- what about the cost of utilities and soap?
I have cloth diapered from the beginning. However- I've been told by many mothers they noticed no change in their utility bills. So, I'm going to say the utilities go up $5 a month. I have used half a bottle of soap in my 3 months of diapering- so for 3 years, I'll say you need 6 bottles of soap. Soap costs me under $3 a bottle.

You can cloth diaper for your child's three years in diapers for the same amount you spend on 6 1/2 months of disposables. Not counting wipes.

What if you decide to keep your diapers for your next child? In the example above, you've made back $540 with selling your diapers.

You've now cloth diapered for 108 months for the same price disposables would have cost for about 18 months. Thats 7 and a half years of free diapering.

You have now cloth diapered your first and second child for less than 5 months of disposables.
Posted by Sarah at 8:14 PM 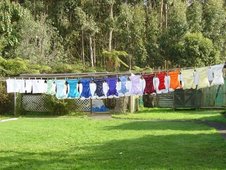